Svelte vs Vue – A Simple Comparison

Comparison of JavaScript frameworks and tools are endless as they are evolving day by day. VueJs is an extremely popular JavaScript framework for building user interfaces, while Svelte is a relatively young tool for achieving the same goal but with a different approach. Svelte inherits some concepts from Vue but follows its own approach for […] 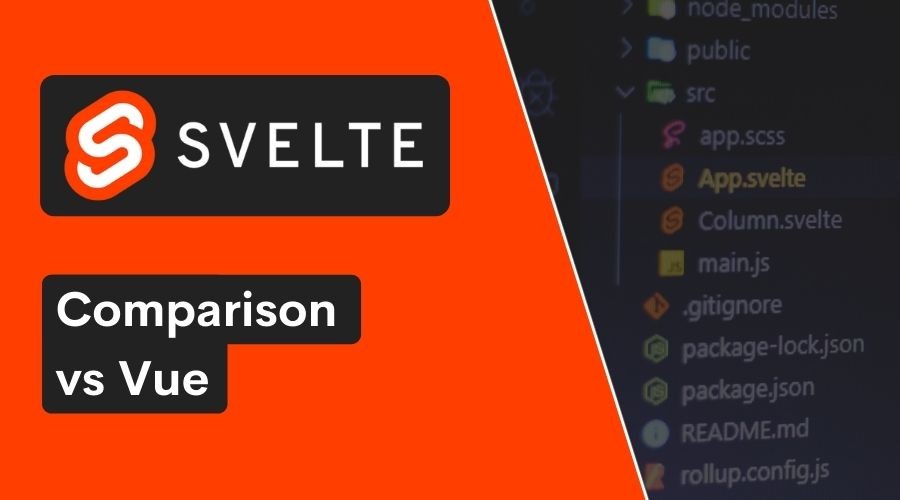 Comparison of JavaScript frameworks and tools are endless as they are evolving day by day. VueJs is an extremely popular JavaScript framework for building user interfaces, while Svelte is a relatively young tool for achieving the same goal but with a different approach.

Svelte inherits some concepts from Vue but follows its own approach for performance and efficiency. Despite many similarities between these two technologies, there are also some major differences to consider. This article compares Svelte with Vue and discusses differences between them in terms of performance, application architecture, Appropriateness for building complex apps, user experience, code maintainability, and learning curve.

Let’s begin with a quick overview of both frameworks.

Svelte is a lightweight JavaScript compiler that can be used to develop high-performance web applications. It is a new entrance to the market introduced in late 2016 and has only recently started to gain traction. Svelte is the most successful tool that initiated the concept of compilation to modern frontend frameworks. It aims at delivering high performance and a smaller codebase while offering a more comfortable development experience.

Svelte enables you to create boilerplate-free components using HTML, CSS, and JavaScript. Unlike other traditional frameworks, it doesn’t use a virtual DOM, and instead, it compiles and converts your UI components into highly efficient JavaScript code that surgically updates the DOM. The unique feature of Svelte that mainly distinguishes it from other JavaScript frameworks like VueJS is that it shifts the work done by other frameworks into a compile step. 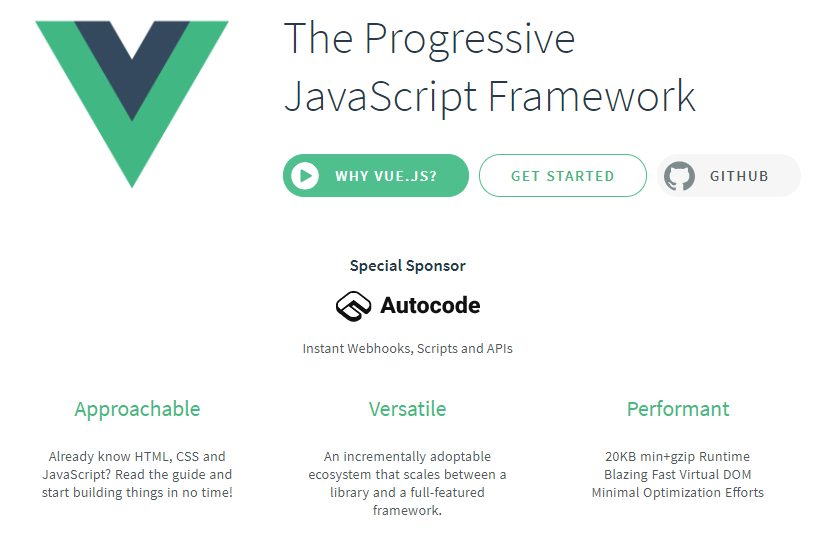 Vue is a flexible JavaScript framework that provides advanced web tools to build frontend applications. It is also considered a progressive JavaScript framework as it allows us to make changes in the application code without impacting the existing core features. This gives the ability to create a progressive UI. VueJS provides opportunities to expand the functionalities of applications using customized modules and visual components through high decoupling.

Performance comparison of Svelte Vs. Vue

In terms of development, Svelte is a well-optimized compiler. It has the ability to generate high-quality code with excellent performance. It also optimizes code during the compile step. This makes the applications have minimum runtime overhead enabling the users to enjoy lightning-fast UI rendering and navigation.

There are many opportunities where Svelte attempts to boost app performance than other traditional frameworks. It focuses on minimizing the runtime overhead without working on optimizations related to virtual DOM. Thereby Svelte gets the ability to offer brilliant performance without even going through the complexity of Virtual structure overheads and concurrent modes.

Furthermore, Svelte directly updates the DOM without depending on any intermediary or other complicated techniques. It monitors your code to track the changes in variables and updates the components that depend on those variables as the variables change.

In the above code sample, we have two variables called count and doubled. The value of doubled depends on count. The JavaScript identifier $: lets Svelte know that doubled is a variable depending on count so that Svelte automatically updates doubled whenever count gets changed. This shows the reactive nature of Svelte without relying on any third-party API.

When talking about VueJS, the status of the Vue application becomes uncertain as new features or extensions are added to its components, making it difficult for the app to load faster. But the good thing is that this framework uses a virtual DOM that acts as the default tool in optimizing the performance of Vue applications.

Lazy loading is an outstanding feature of Vue, which helps to improve loading time. VueJS asynchronously handles a third-party library and automatically manages the critical dependencies by dividing the libraries as ones that should come under the main application package and the ones which can be leftover in routes apart from the core package.

The below image displays a performance benchmark comparison of various frontend frameworks in 2020 according to the Lighthouse performance score.

In terms of application structure, Svelte is greatly designed to interpret fast user interface inputs. As Svelte works as a compiler to load interfaces using existing JavaScript, it skips the middle stage of loading a virtual DOM before reflecting content to the user interface.

That’s why Svelte is faster than Vue and other JavaScript frameworks when it comes to developing user interfaces. Svelte makes the process a lot more speedy when it comes to serving the content to the users.

On the other hand, Vue JS follows the ViewModel approach, especially when developing large applications. The view segment and the model segment are connected using a two-way binding approach.

Vue JS’s architecture and its DOM layouts can be divided into two parts, called the Filters and Directives. In contrast to most other technologies, VueJS is not a full-blown technology.

Therefore the managing of application development is made more simple and flexible by following a View Layer pattern.

Since Svelte is a quite young framework with less community support, it lacks support for various plugins and integrations required by complex production applications. Therefore, Svelte is still not in an ideal stage to be used for developing complex web applications. It is well suited for small or startup applications with a simple structure.

When considering Vue, developing complex applications using it can be harder, and the coding will get a little bit serious. Developing complex apps requires the code to interlink various basic components, but Vue finds it difficult to standardize the order of components. However, with Vuex ( state management library of Vue), developing complicated apps is made easier without having to write any confusing code. Vuex is especially attuned to reduce complexity influenced by the reactive nature of Vue.

The user experience of Svelte Vs. Vue

Svelte is a smart UI development tool that can build interfaces that offer the best user experience. Its features, such as syntax and application architecture, support this great end-user experience. It is also flexible to meet the needs of scaling web apps.

The tool also shows advances with its speed and a reliable components pattern. It assists the latest component-based UI design with a decreased loading time (By getting rid of the middle step of loading the virtual DOM). Moreover, Svelte application size is very small after the compilation, which speeds up the loading, unlike Vue and other frameworks. Therefore, the Svelte user experience is fast, smooth, and dynamic with improved speed and fast content serving.

When it comes to VueJS, it’s also a perfect choice for creating interactive and eye-catching UIs due to the capabilities of its tech stack. It’s virtual DOM ensures that changes made to the app are not visually reflected straight away, which gives more room and scope for experimentations in UI design.

The data binding nature of VueJS lets developers set HTML attributes easily, and those values can be updated anytime without affecting the existing code with the help of a binding feature called v-bind.

The following line of code shows how to pass an object to v-bind:class to to toggle classes dynamically. The “active” class will be assigned only if the “isActive” data property is true.

Templates, transitions, and animations can be customized according to your needs using material components and various UI tools such as Cron generator and Chakra-ui-Vue.

Svelte sticks closely to modern app development. Each application built with Svelte consists of components, and the application itself is considered a unique component. Svelte handles the codebase by allowing those components to remain detached while maintaining the flexibility to present as one and function seamlessly.

You will find Svelte applications having multiple components such as buttons, text boxes, forms, etc. All these components work consistently to provide a smooth user experience. Developers can reuse these components using conditions to speed up the development process. Therefore, it is easier for developers to maintain the application structure with Svelte than other frameworks.

With Vue JS, there is a possibility that maintaining Vue applications will not become hard as the framework is still growing and trying to fix their community issues and support limitations. Defining conventional coding practices will help to overcome these limitations and barriers as Vue JS lacks good support.

Below is the source code of a Svelte component written for a basic counter.

As you can see, the above Svelte component is a superset of HTML included in a single .svelte file. A component like that consists of three sections as the following.

All the above three sections of a Svelte component are optional and can be placed in any order.

This simple example well illustrates the basic concepts you will have to deal with most of the time you are using Svelte. It is also easy to understand the functionality of the above code snippet. Those are important qualities of a good framework as it should not hinder the users or have a deep learning curve.

VueJS is the most convenient framework to learn and understand among all the other traditional Javascript frameworks. Basic understanding of ES6 functions and primary skills in JavaScript are all required to learn Vue. Documentation of Vue is also user-friendly and clear though it may not be rich as other frameworks. Vue’s official documentation is sufficient for a novice to get a head start in learning VueJS and developing apps with it.

The following table depicts a summary of all the comparison factors of Svelve and Vue which are discussed above.

Vue is a powerful JavaScript framework that comes with many third-party libraries, components, and massive community support. It may not have as excellent performance as Svelte, yet this framework still holds decent popularity among web developers. Also, the status of VueJS is promising to get better with v3 on the horizon.

Even though Svelte is much younger than Vue, it is rapidly growing in popularity. With its impressive performance, friendly syntax and API, and growing community, Svelte is likely to challenge Vue in the near future.

How to Monitor Your Organic Search Rankings like a Pro